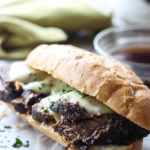 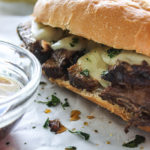 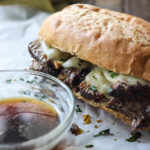 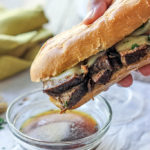 This slow cooker French Dip sandwich is all about fork-tender slow-cooked chuck roast served over crusty rolls and topped with melting slices of provolone cheese. Dip in the au jus and eat your way into a warm, hearty dinner!

Today we’ll be doing a slow cooker French Dip sandwich, a hot sandwich that’s the perfect for just about any time of the year. It’s really all about getting some good chuck roast, tossing in some seasonings and letting it slow cook for 8 hours while filling the house with tempting smells and promises of dinners to come. Most of the work comes from assembling the sandwich later. It’s that easy!

This one will be good for at least 8 sandwiches so that’s either plenty of leftovers for a smaller family or one hearty dinner for a big one. For more sloppy au jus dipping sandwiches, try this slow cooker Italian beef sandwich.

Like most slow cooker recipes, it was really quick to put together. The searing did require some finesse though because I had 4 pounds of beef clamped precariously in my tongs. It’s a lot of meat!

And since I’m mentioning it already, I would say make this if you have a huge family or don’t mind eating the same thing for days. Or you can freeze it. Because it’s a lot of meat!

Mixing the broth together was fun. Once you’re done with the prep state (which I promise is a lot faster than how much I have blabbed so far), toss it in the slow cooker, pour that broth in and sit back and relax for 8 hours. Or go to work. Or sleep! It’s a nice thing waking up to delicious smells in the house.

Then it’s shredding time with two forks. This part is easy. Be sure to separate the fatty bits and toss them. I used hoagie rolls because it’s a perfectly portioned sandwich for one. Ours came in a bag of four, so we got two bags to work with the recipe.

Or you could opt for a traditional baguette. Whatever works for you! Just make sure it’s a crusty, hearty bread so it can hold its form when you’re dipping. Soft bread will give you a soggy mess.

Make sure to top with some Provolone cheese for some melty goodness and/or a very thin spread of horseradish sauce for some bite. Once the sandwich is assembled, toast/broil both halves of the sandwich to melt the cheese and get the bread all nice and crusty.

The crustier it is, the more it holds up when you dip it! I did mine in a toaster oven since I didn’t feel like heating up the stovetop oven for just a few sandwiches, so that’s always an option.

And that’s all there is to it. Enjoy your hot sandwich and happy dipping! If you own an instant pot, try this instant pot French dip version.

Did you make this recipe? Rate it!