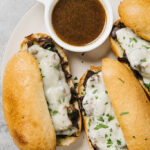 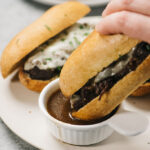 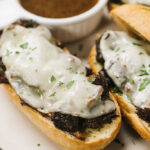 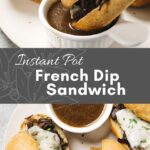 Today we’re making an instant pot French dip sandwich. It’ll have fork-tender, pull-apart chuck roast served on toasted crusty bread with melty provolone cheese and a bowl of beefy au jus to dip it all into.

It’s a good all-year-round kinda meal; a comfort to have during the cold months and a fun, messy sandwich for the warm ones. I’ve made a slow cooker French dip sandwich version before and wanted to try it out in the instant pot and it came out wonderful.

In just a little over an hour of cooking, this will make enough sandwiches for 6-8 people. There were just the two of us so we had sandwiches for days which we didn’t mind at all. The fresh bread from the deli keeps well for a couple of days and so does the beef and au jus. In this case, the leftovers were good.

So whether you have a big family or friends to share it with, or opt for the delicious leftovers for days option, get ready to dunk your sandwich this weekday, weekend, or whenever you feel like a tasty, melty and messy hot sandwich. Let’s get started. 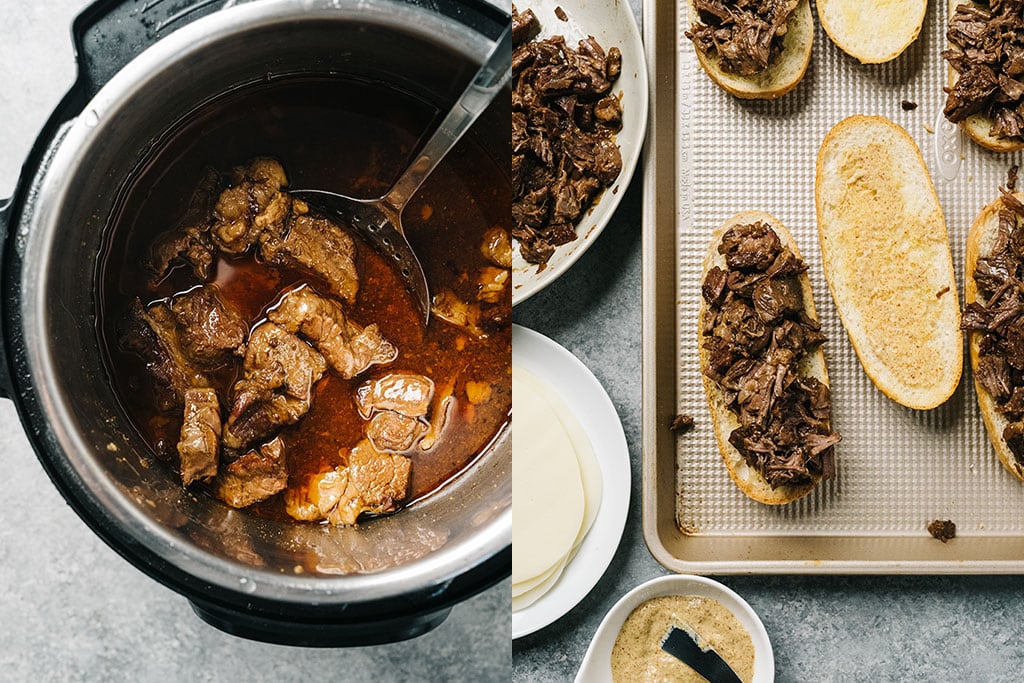 Beef – Trim off some of the fat before cooking it. Leave just a little behind for the flavor but not too much that you’ll be overwhelmed with fatty au jus. Then cube the chuck roast for faster cooking times. Not only does it decrease your cooking time, it also fits better in the instant pot. I seared the meat cubes prior to cooking as well. Searing the meat is optional but highly recommended for more flavor and doesn’t take too long at all.

Bread – I used hoagies but regular French bread works as well. Just make sure it’s a crusty, hearty bread so it can hold its form when you’re dipping. Soft bread will give you a soggy mess. Toasting it on a baking sheet in the oven prior to adding the roast beef will make it even firmer but you can skip this step since there’s still the toasting it will get later on to melt the provolone cheese. I just like my bread extra toasty.

Where’s the liquid? Don’t worry if you’re not seeing as much liquid before cooking as you’d expect. Chuck roast will break down and add more than enough au jus once it’s done cooking. That coupled with the liquid from the canned French onion soup will give you plenty of au jus to dip with.

Au jus – I used a seasoning packet but you can also add in a (10.5 oz.) can of beef consommé or 1 cup of beef broth. Just keep in mind that the chuck roast will break down and add its own au jus to the volume of liquid already there. Coupled with the liquid from the canned French onion soup I used, we had more than enough au jus for the sandwiches and then some.

Salt – There’s no need to season with more salt since the au jus seasoning packet and French onion soup has enough salt/sodium content to flavor the meat and broth.

Horseradish cream/mustard or mayo – I usually apply a THIN layer of horseradish cream just to give the sandwich a little bite. It works beautifully with the savory roast beef and the silken texture of melted provolone. If you’re not a fan of the flavor at all, mayonnaise is also an option. You can also spike your mayo with a little bit of horseradish. Otherwise, leaving all that out and simply buttering your bread before toasting it will also work.

And that’s about it. This one is a quick, weeknight meal just waiting to happen. I hope you and your family, or friends enjoy these sandwiches. Happy eating and let me know how you liked them in the comments below!

Did you make this recipe? Rate it!