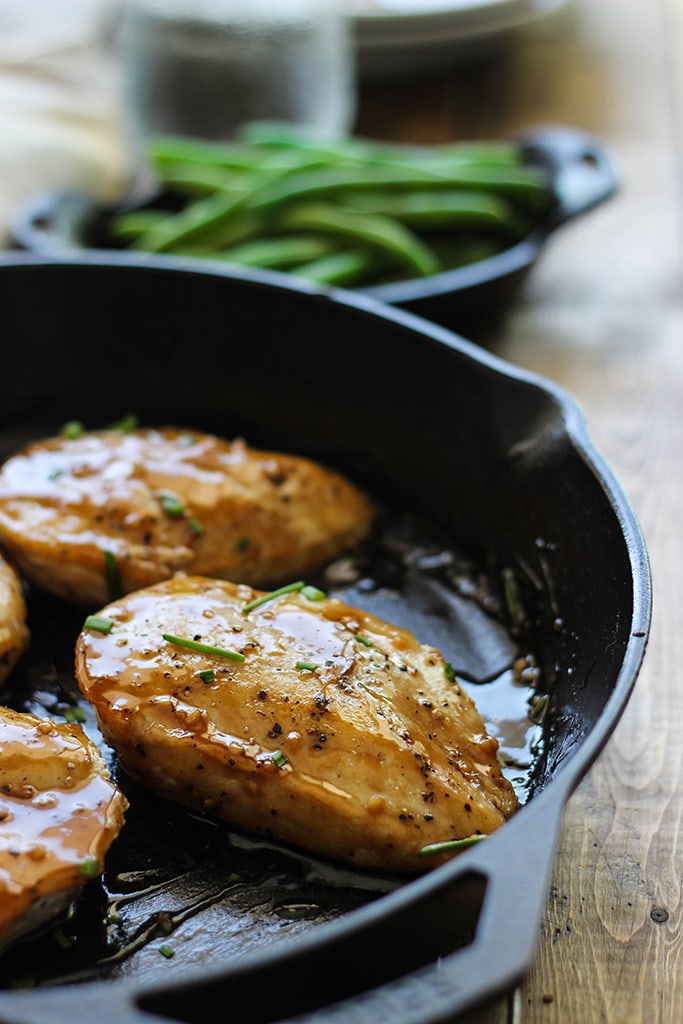 Chicken breasts can be pretty boring. I usually cook with boneless, skinless chicken breasts so there’s no magical crispy skin that I get to steal from everyone later. They really don’t look at good as thighs and certainly aren’t as juicy. But they’re cheap and easy to deal with in the kitchen, so we stick with it. Yes, chicken breasts can be boring. But that doesn’t mean they can’t be delicious. 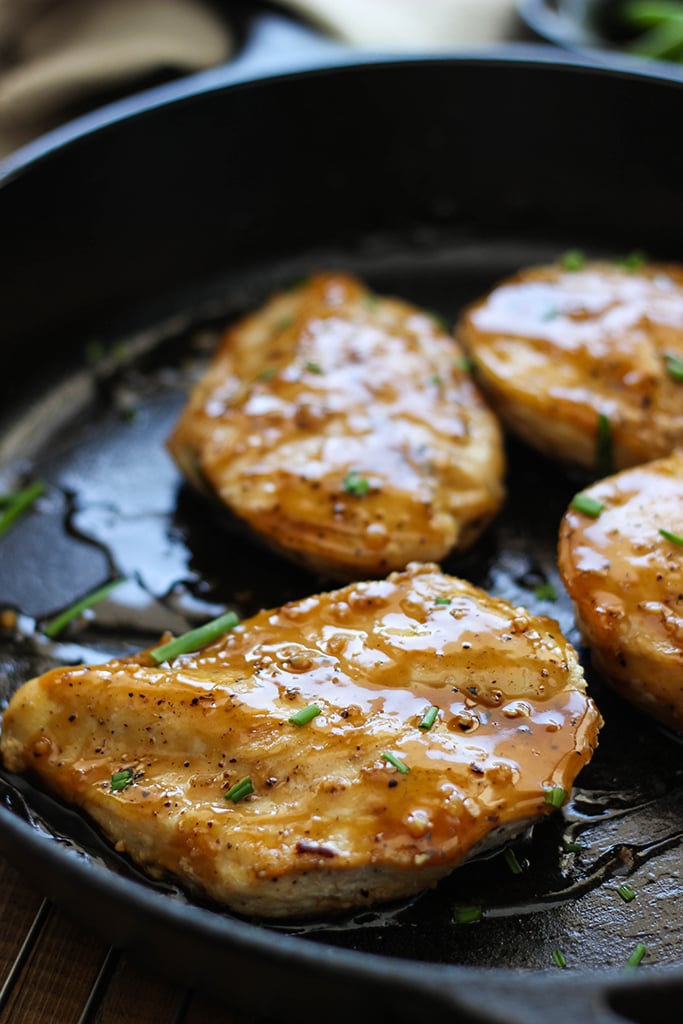 If you’ve followed me long enough, you’ll know I like depth of flavor. So instead of dumping a whole bunch of maple syrup in there and calling it a maple glaze, I’ve tweaked the flavor profile just a little to have notes of citrus and some soy sauce to balance it out some more.

So let’s get cooking! 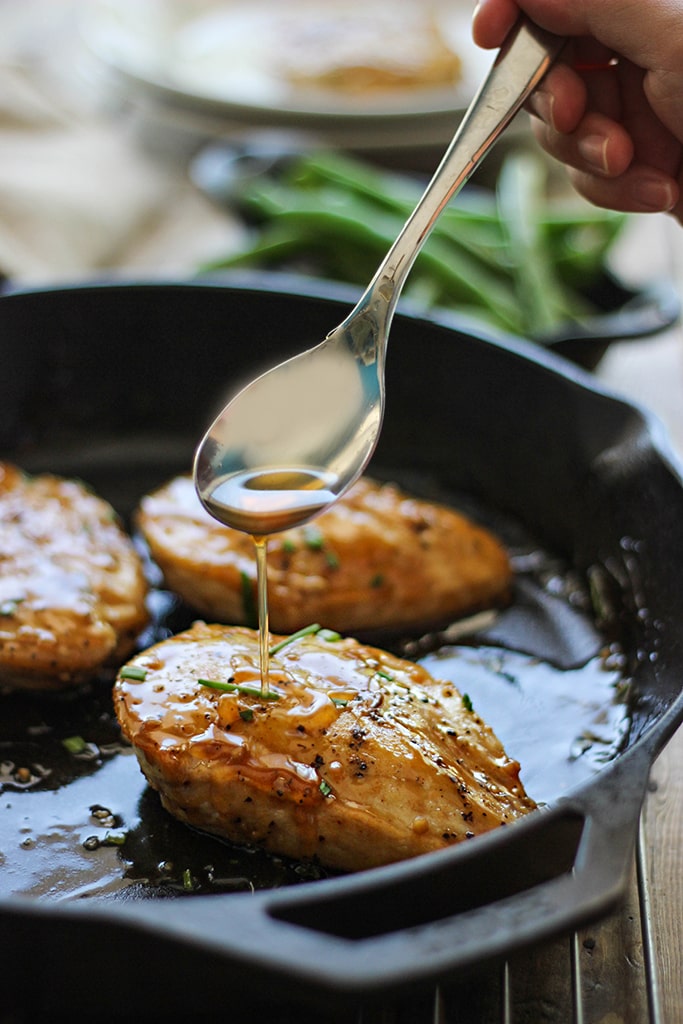 This recipe is enough for four, but if there’s only two of you just use two chicken breasts but keep the sauce proportions the same. You still want enough glaze to go around and more sauce is better than no sauce.

Pat the chicken breasts dry and remove any fat. Then season with salt and pepper and rub it all in. Here is where we pan-fry it for a bit, about 3 minutes per side or until it’s nice and browned. You could do this entire thing over the grill as well and just baste as you go along but I started with pan-frying and finished it up in the oven. 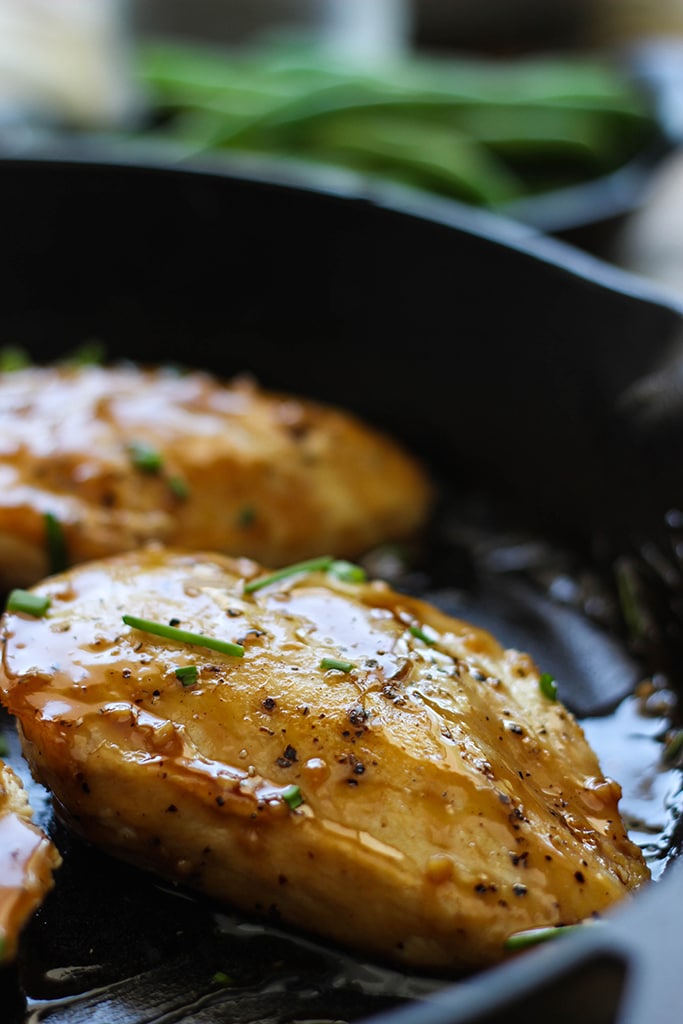 Now there are two ways to deal with the sauce or glaze. Whatever you wanna call it. You could do a reduction in a pan before baking or after baking or you can cheat and add in a cornstarch slurry to save time. I always do this because it’s fast, I can control the consistency and it’s just easier overall. So much better than standing over the stove and waiting for the sauce to thicken. The sauce will turn whitish when you add the slurry. Bring it to a boil and wait until the color returns to normal. That’s when you know the slurry has thickened it as much as it can.

Again, you can cornstarch slurry it before baking and just glaze the chicken before it goes in the oven, or you can do it after by removing the chicken and bringing the sauce to a boil on the stove top with some slurry. 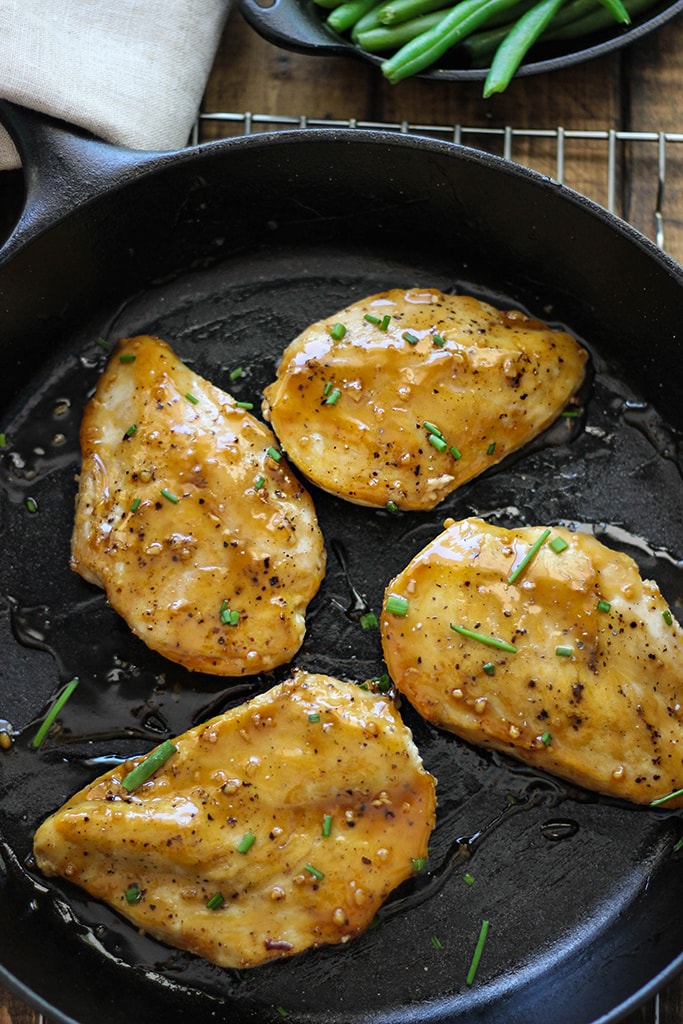 When you’re spooning the sauce over the chicken, tilt the skillet so you can get to the sauce easier. Then we bake. I used a 12″ oven-safe skillet so that’s about the size you’re looking for. I didn’t want to overcrowd the chicken so they wouldn’t end up steaming. Give them room to breathe.

After it’s all cooked and done, we do the thickening of the sauce or if you’ve already done that just go ahead and enjoy your food. Be generous with the glaze! 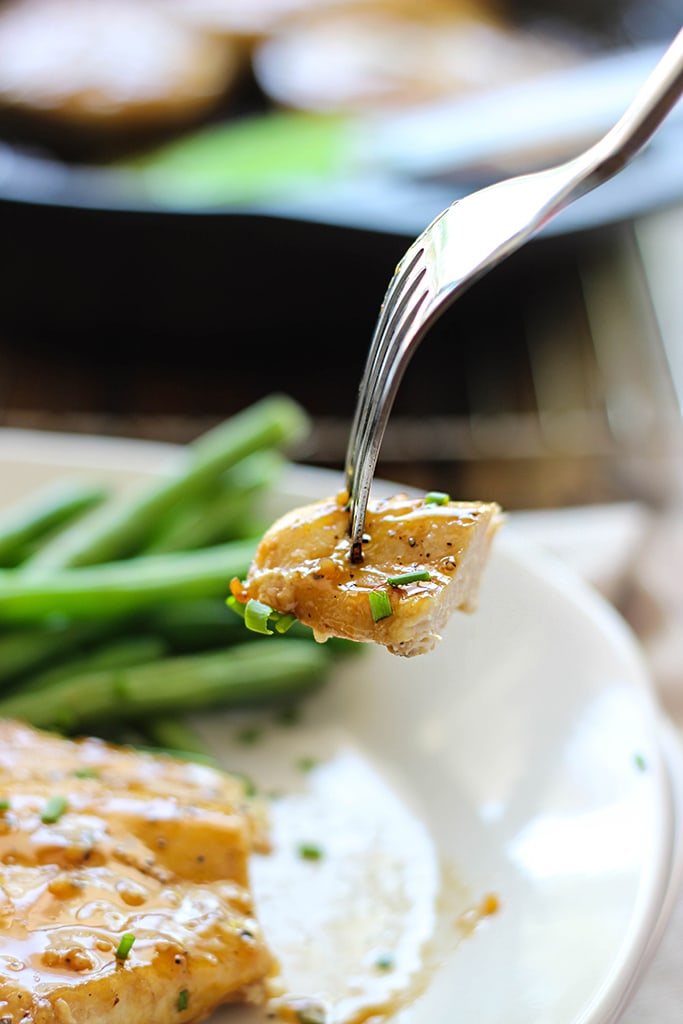 If you’re in the mood for a salmon version of this, there’s a salmon bowl recipe I made awhile back.

PS: If you want it a little smoky, add some smoked paprika to the sauce! 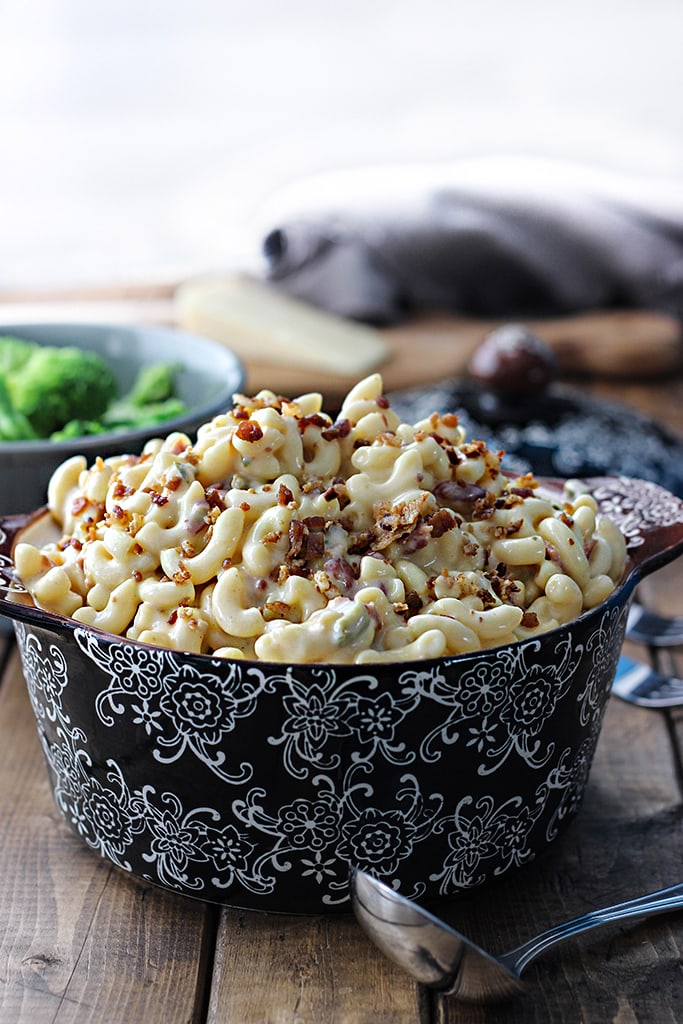 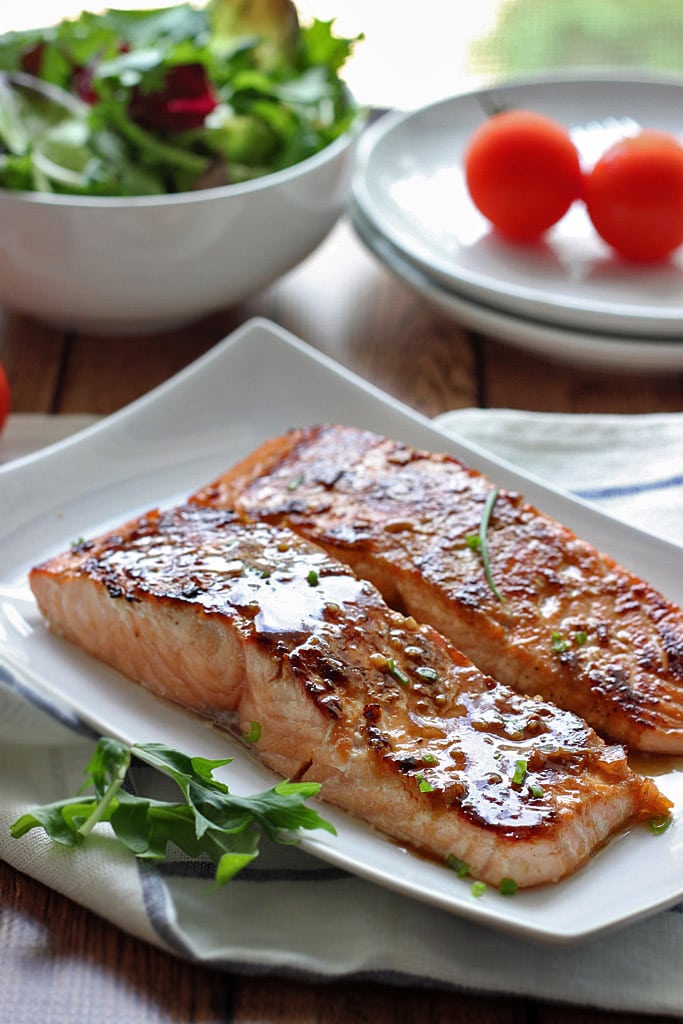 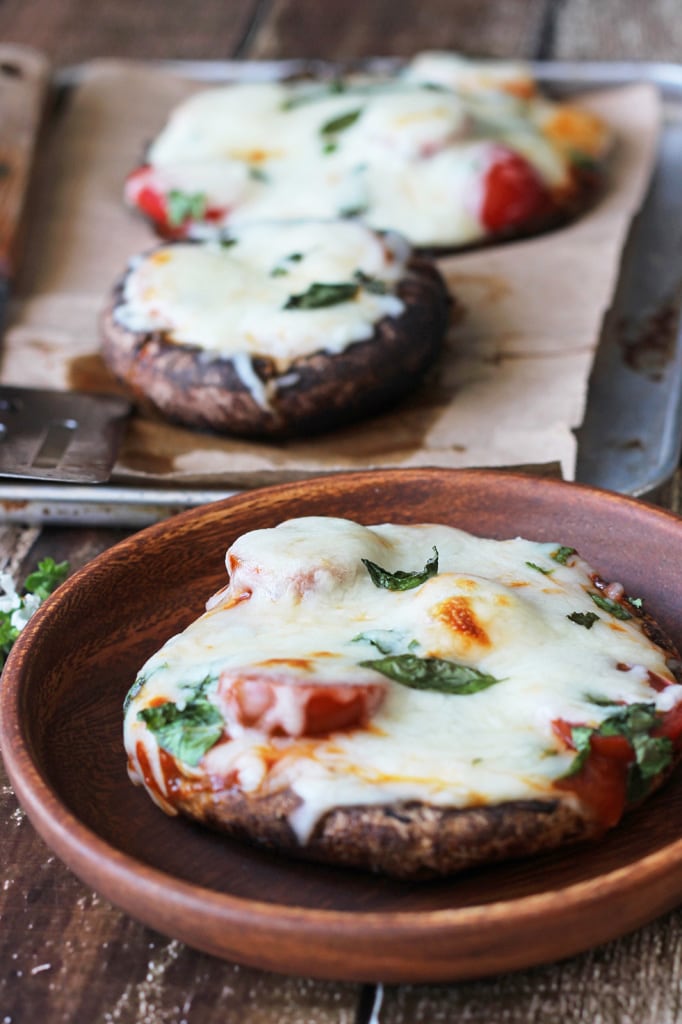