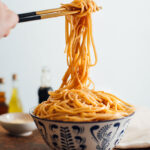 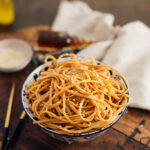 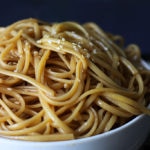 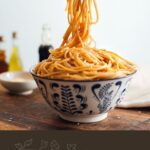 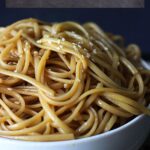 I’m beginning to suspect that black sauce is a mixture of some kind; soy sauce and maybe something with teriyaki sauce elements. When someone asked at my table, they said it was Coca-Cola. Uh-huh, Back to the cooking: sugar, salt and pepper and more mixing and finally it’s heaped onto everyone’s plate and topped with sesame seeds. And if you want to give it some kick, toss in a few red pepper flakes.

Well, that’s my take anyway. If you know any better or if you are/were a Hibachi chef in training and don’t mind divulging the secrets, I’m all ears. Give it to me! For now, this is the best I can do. Since I don’t have those fancy grill thingies they have at hibachi places, I cooked mine in a wok big enough to handle the mixing of the noodles. You won’t get the slightly charred and mixed flavor from all food being cooked in one place (rice, meat, noodles) but it works.